Later, after their discussion, the Captain called the other members of the crew to reboard and be briefed on their situation.

“Listen, y’all,” said Little Red. “You know already that there’s some weird things happening at the northwestern border area. I’ve an idea about what, but not why. So now we need to make a detour and fetch a package.”
“Time to head northwards for a bit, then.”
“What kinda package? Asked Tira.
“The one you left with the Catawba Nation last winter.”
“I was afraid you were gonna say somethin’ along those lines.”
"It's like this," said Captain Willie. "We are going to take him over the mountain with us, into Shawnee Territory."
"Why?" asked Tira. "What did those folks ever do to us that we got to dump him on them? Sounds like some kinda punishment if you ask me."
Tira shook her head glumly. “That’s once package I would be happy not seein’ again.”
“Or smelling either,” chimed Kennia.
“Yeah, just what do we need him for, anyhow?”
“I can answer that” replied Little Red. “Your friend. . .”
“Not mine!” Tira busted in.
“Very well, your, ahem, acquaintance is related to someone of great importance to our mission. Bringing him along will get us this person’s full attention, Hopefully. And then we can get him to listen to what I have to say.”
”Which is?” Asked Tira pointedly.
”There are squatters in No man’s land between Carolina and the Shawnee lands.”
”So tell us something we don’t already know!” Burst Tira. ”There’s always some kinda fool ain’t where he’s supposed to be. Specially long any kinda border.”
Little Red nodded. ”Exactly. But these fools are trying to dig a mine without permission and they don’t intend to leave. Ever.”
Kennia whistled. ”Now that is not gonna sit well with either the Shawnee or the Tsalagi.”
”That’s an understatement.”
”I expect they’ve been keepin’ their own look-out on the borderlands, though. What makes you think they’ll want your input?” Said Kennia.

Posted by Erin Winslow aka Itsbugart at 12:21 AM No comments:

Return to the Mountains


It took several days to cross the entire piedmont region and now there were the mountains to navigate. The Sandflea was keeping to a moderate pace rather than speeding along. Her crew needed to keep an eye on the countryside as well as the sky. But it was the sky that delivered a surprise. Far in the distance the crew could see a tiny speck of an airship following them. As it came closer they could see that it was moving rapidly and meant to overtake them.

“Full stop!” Cried Captain Willie. “We gotta to see what’s goin’ on with this fella.”
“Been expecting a message, have you?” asked Kennia.
The captain shrugged. “Figured it was bound to happen. Everything so vague-like and fishy. Might as well get some more intel.”

As an airship doesn’t exactly stop on a dime so some time had passed before the Sandflea was moored. Meanwhile, the smaller airship had caught-up with them and its pilot had shimmied down a knotted rope. He waved wildly as he strode towards them.
“Hey there Miss Kennia and Miss Tira! How y’all doin’?”
Mike, for it was him, gave her hand a vigorous shake.
“What have y’all ladies done with your captain?”
“He’s still in the cockpit with the new spy lady. No need for everyone to come out. Tira and I just wanted to stretch our legs a bit.”
“I’ll just pop in and wag my jaws at him for a bit.”

Mike had been aboard the Sandflea enough times that he could easily find his own way up the ladder and to the cockpit.
“Hey there, captain! How’re you?”
“Well enough, I suppose. What news do you have?”
“You too, Miss. ‘Fraid I don’t remember your name! You must be our new lady super-sleuth, am I right?”
“My name is Rose Chavous.”
“Captain, Miss Rose,” Mike bobbed his head in greeting. Since he was very tall and the airship was cramped, his head was already bent forward but he still managed a polite dip.
“Aw, just call me Little Red!” She laughed and held out her hand in greeting. “So what’s the latest news?”

Later, after their discussion, the Captain called the other members of the crew to reboard and be briefed on their situation.
“Listen, y’all,” said Little Red. “You know already that there’s some weird things happening at the northwestern border area. I’ve an idea about what, but not why. So now we need to make a detour and fetch a package.”
“What kinda package? Asked Tira.
“The one you left with the Catawba Nation last winter.”
“I was afraid you were gonna say somethin’ along those lines.”
Posted by Erin Winslow aka Itsbugart at 3:40 PM No comments:

It took a while

but after a few more days journey, the Sandflea's crew was once more in sight of the mountains. There was a distinct chill to the air, even though it was early summer on the coast. The mountains were their own, local climate that was more than a bit cooler than downstate, especially in the early mornings. Unfortunately, that also meant that the weather was much rainier than in the piedmont area as the warm, moist coastal breezes encountered the Blueridge Mountains and dumped their cargo of moisture as rain. 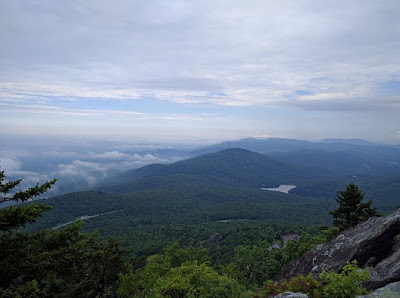 "Almost there" said Little Red. "I never did like hot weather."
Tira, who was still cross about her vacation being shortened at a moment's notice, just shrugged. She had brought some of her popular mechanics magazines with her so she wasn't entirely unhappy. But she had planned to read them while lying on the beach, not while bundled into a cramped airship.

“So what will we do when we arrive? Do you have a plan?” The Captain shrugged, “ask our new navigator. She’s the one with the intelligence, I’m mostly about the transportation.”

“Well, you are the captain, ain’t ya?” snapped Tira. “You must have some idea what we doing out here. We were in the mountains just a few weeks ago, so somethin’ must be happenin’ or we wouldn’t be heading back to soon.”

“Oh, I have a plan, alright. A millions plans in fact,” said Little Red. “Won’t know which one is the right plan till we get there and see for ourselves, first. Then we can do the plan thang.”

“The wind is picking-up now that we are coming up on the foothills. I hate that calm in the Piedmont.”

Posted by Erin Winslow aka Itsbugart at 8:29 PM No comments:

Well, I'm back! And in considerably better mental and physical health. And I've really missed working on this story, so here comes another try.
Posted by Erin Winslow aka Itsbugart at 10:11 PM No comments:

Where do we go from here?

When I started this story, I had it roughly blocked-out and a plan of posting new chapters every other week. This plan clearly has not worked out! This is in part due to mental health issues; depression creates a "brain fog" for me that makes it hard for me to find and use words. It's like those cartoons where the cartoon character gets hit and falls down and we see the tweety-birds and stars circling over the character's head, almost out of reach.

I feel a lot better now but I need to rethink how this project is developed. It is tons of FUN, so I don't intend to toss it out! But I am leaning towards taking down the blog and just writing this as a regular novel and then publish the whole thing at once.

What do y'all think? If there is still anyone watching (and I will certainly understand if there isn't!!!)
Posted by Erin Winslow aka Itsbugart at 1:22 PM No comments:

In the airship cockpit the newest crew-member chatted with the Captain as they headed north by northwest. Clear skies and a light wind made for smooth flying over the central piedmont area of Carolina. Of course, that didn't mean that an afternoon thunderstorm wouldn't build-up suddenly, but for now they were safe.

“Somewhere around here is the remains of Cofitachequi what was.” said Captain Willie as he pointed through the windshield to the ground. “You know, the old Indian main town from when the Spanish first showed-up. Not really sure just where, of course, but somewheres hereabouts.”
“Hasn’t anyone tried to find the remains?” asked Little Red. “To investigate them?”
“Naw” answered the Captain. “No real idea of where to start. It could be just about anywhere round these parts. Then again, I think a lot of Indians don’t want it disturbed either. They don't take to outsiders putting their noses where they don't belong."
She nodded. “Understandable.”
"Tira and Kennia might know some more about it. They've got friends who are Catawba and Kennia's old school-mate is even married to a Catawba fella, but I don't know how interested they are in sharing with you. At least not until they get used to ya."
"Oh, I just kinda grow on folks. Eventually y'all won't wanna say good-bye to me!"
"We'll just have to wait and see" was the Captain's noncommittal response. Though Little Red was pretty sure she saw a slight smile under his mustache.
"Suit yerself."
"I always do."

Posted by Erin Winslow aka Itsbugart at 2:50 PM No comments:

As the Sandflea flew northwestwards at a moderate speed Tira and Kennia continued their conversation about their new crew member.
“She said that Chavous was her mama’s family name, didn’t she? Wonder what happened to her daddy?”
Tira answered “And I wonder if she’s related to those Chavous.”
“Which ones? There’s folks named Chavous and Chaves all over the place in Tuscarora country.”
“You know the ones I mean.  The French ones. She sure ain't no Tuscarora.”
Kennia just shook her head. “Please, just let it be for once. We’re just on a mission together. It ain’t like we’re getting married or nothing. Let’s just focus on our work,”
Tira frowned. “I’m just saying, that’s all.”
“Well, let’s just say something else. What about your mechanics magazines? You bring some of them with you? There must be something interesting in them. That’s what you’re always tellin’ me at least.”
Tira smiled at her friend’s choice of an alternative topic.
“Yeah, we weren’t in port long enough for me to get caught-up with my readin’. I have a whole mess of readin’ to do when I’m not working. I do wish I’d had the time to give her a good look-over before we left Charleston, though.  There’s always somethin’ that needs adjusting, don’t ya know?”
Kennia patted her shoulder. “I know you’ll be busy keepin’ everything running right.” She signed as she looked at her pocket watch. “Now I must relieve our Captain before he gets too cranky from being cooped-up in that little cockpit. Maybe you oughta invent or design a bigger one for tall folks! See ya later in any case.”

Meanwhile, back at the mining camp (for that was what it really was), spring  had come to stay even in the higher reaches of the Appalachian Mountains. With the milder temperatures the men were becoming increasingly boisterous. No longer content to huddle around the wood-stove and drink coffee for warmth, a few had made some half-hearted attempts to plant a small kitchen garden as a way of passing the time. No one made any effort to plow and plant a commercial crop. The pair of oxen spent most of their days standing and chewing their cud. For better or for worse, the group had abandoned all pretense of starting a real farm. Some had taken to panning for gold in a nearby mountain stream but without much success.
Posted by Erin Winslow aka Itsbugart at 7:01 PM No comments:

The very beginning of our story. . .